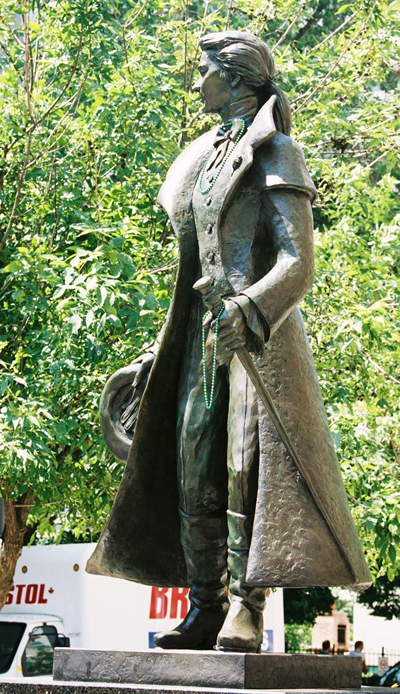 (Original date: 07/02/2012)
Around the same time as a public screening (last year) of Bad Habits at the 519 Community Centre in downtown Toronto, a group of people interested in establishing a new OPI in Toronto met to start the process. Further discussions led to a formal Inaugural Meeting at the Canadian Lesbian & Gay Archives in March of this year.

Since the time of the original Toronto Order, the procedure and process to forming a new group of Sisters of Perpetual Indulgence has become more structured. The Abbey of the Divine Wood is pursuing Mission status within OPI. The name is a reference to Alexander Wood; an historical figure in Toronto’s gay community. The photograph to the right is of the statue of Mr Wood, taken during Toronto’s 2006 Pride festivities.

Update 2015:
The Abbey of the Divine Wood is no longer recognized as a Mission of Perpetual Indulgence. As of this year a new group formed from the ashes of the Divine Wood and is working towards achieving Mission Status. Find The Toronto Sisters: the Convent of the Jubilant Order of York on Facebook.

Also, the Abbey of the Festival City Sisters of Edmonton AB is no longer recognized as a Mission of Perpetual Indulgence; I’ve heard nothing further from there. There is a new group in Montreal that is, I believe, also working to become a Mission- they have a Facebook Page.
Update 2018:
The Toronto Convent of JOY continues as a Mission House. The Montreal Sisters area a fully-professed House under the French (Paris) Order.

Web forms are a primary target for nefarious types. Please contact me via email to contact(at)digitalgryphon(dot)com.

Or support the USPS by sending me traditional mail at:
The Digital Gryphon LLC
850 Twin Rivers Drive #202
Columbus, OH 43216

SisterFlirt.ca, as well as GuncleTarot.com, operate as divisions of The Digital Gryphon LLC within our current capitalist structure. Neither is driven by a desire to maximize profits.